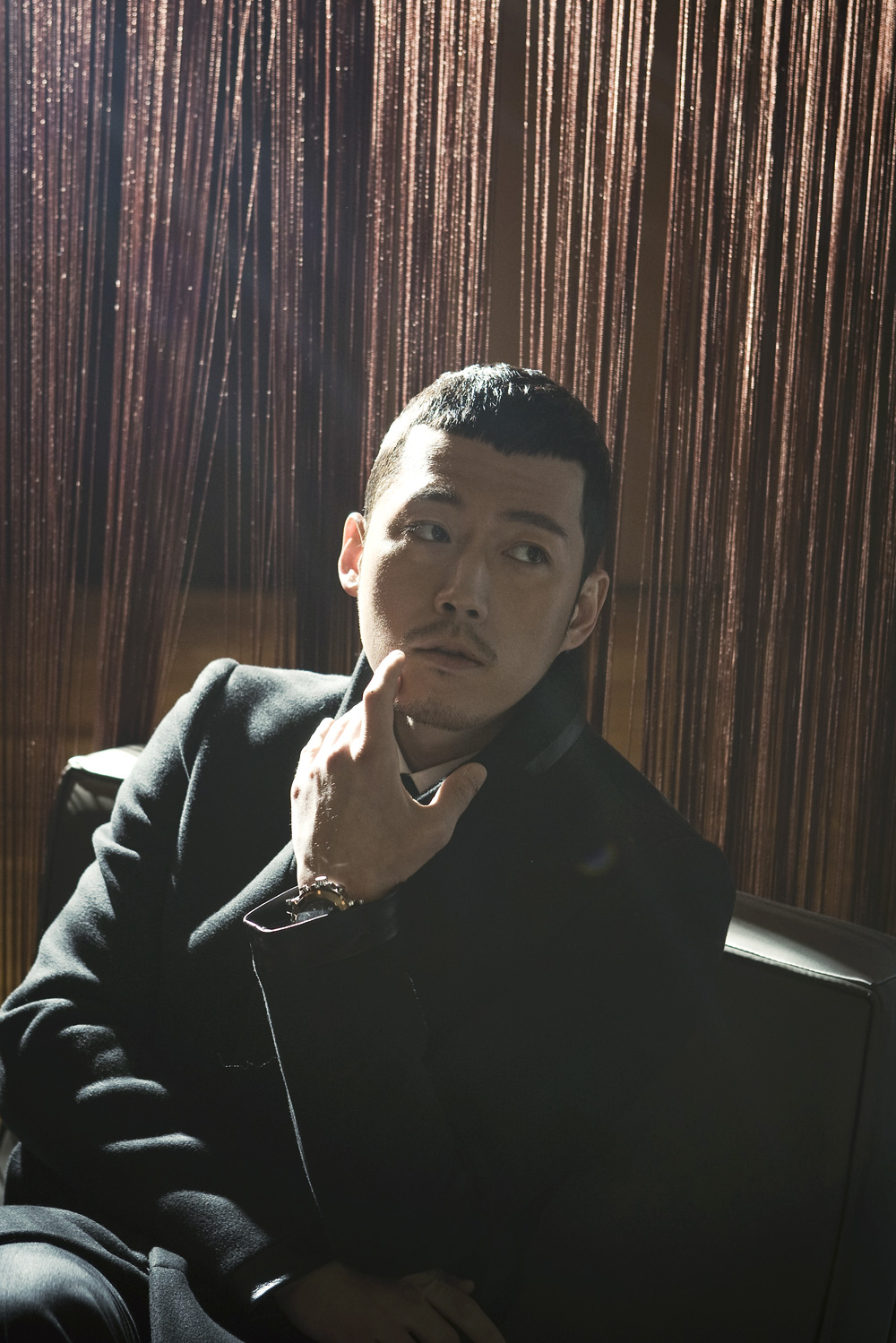 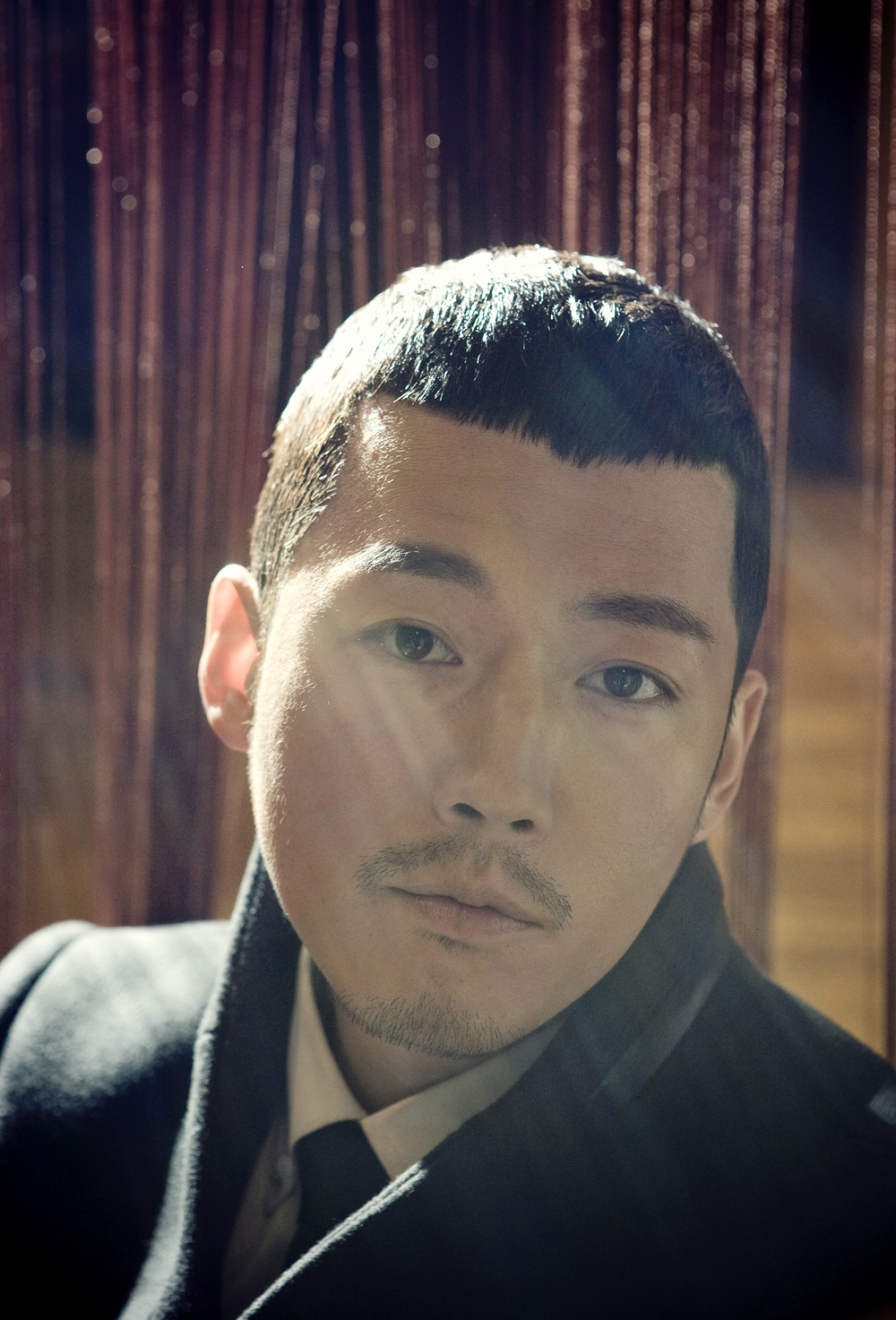 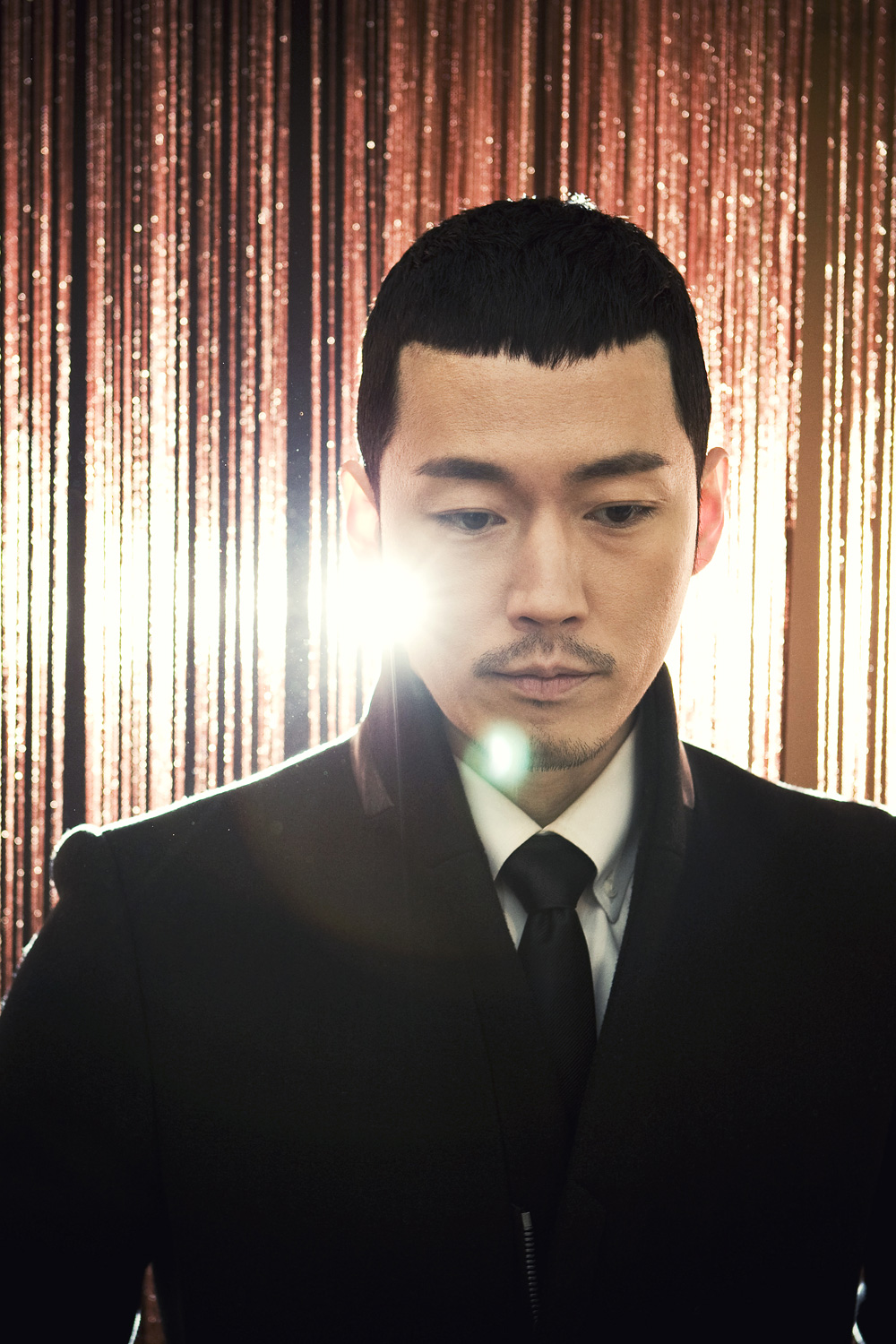 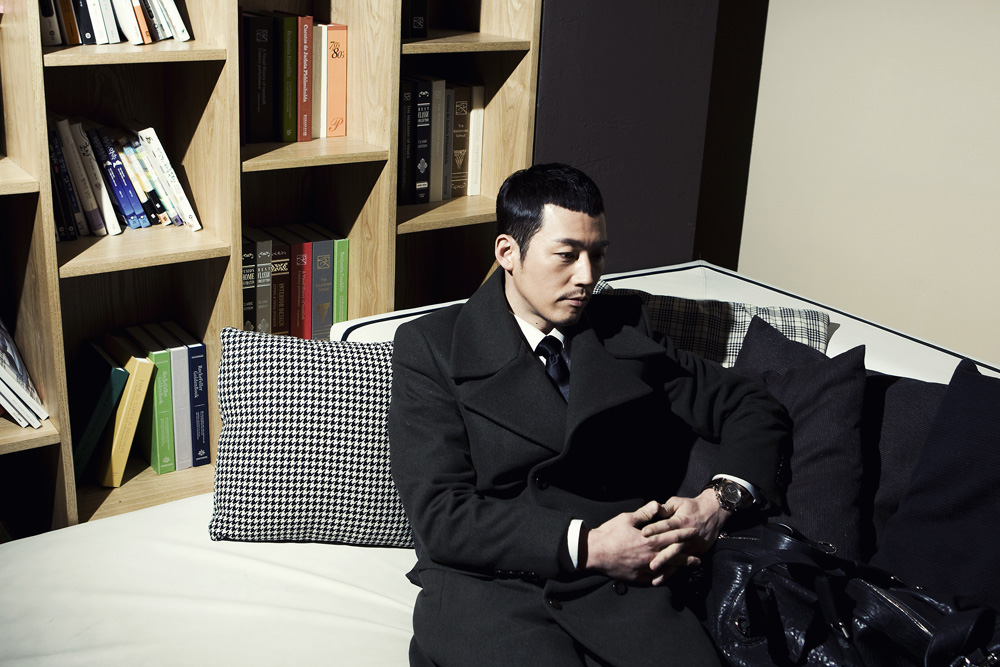 
In “The Slave Hunters” and “Deep Rooted Tree,” there were a lot of action scenes although it was a costume drama. Now you’re shooting an action drama set in the modern day. Do you have a preference between the two? Is one more fun or harder to do, for example?

It’s not about which is more fun or harder. For me, action scenes are about the character’s movement. The style of action changes depending on the character and what you have to do in terms of action only differs depending on what kind of props you’re working with. In period dramas, you work with swords or spears and in modern scenes, you fight at close quarters with guns wearing a suit. They’re different but I find all of them fun.

Do you find it easier to do action scenes since you’ve done a lot of them?

We practice a lot before we shoot and it’s always fun to try new things. But we don’t just concentrate on showing spectacular scenes involving action. Emotions are equally important. So even when we’re shooting action scenes, we try to stay focused on our characters’ emotions.

You received critical acclaim for your performance in two previous costume dramas, “Deep Rooted Tree” and “The Slave Hunters.” Do you ever feel that you’re more suited to period-set dramas?

That idea has never occurred to me before but maybe I should think more about it from now on. (laugh) It’s not the genre but the characters I was drawn to. I’ve always been fond characters who are removed from the mainstream, people who are a bit different and maybe somewhat isolated. I’ve always been attracted to such characters.

“Every character has been a turning point.”


So for you, it’s not about the setting of the drama but the characters themselves. I remember you also portrayed a marginalized rebel when you debuted 16 years ago [in the first series of the KBS drama “School.”] Have you ever felt that there was a turning point in your career?

To be honest, I have experienced a turning point in every project I’ve been involved in. The only difference was how big or small the turning point was. I wasn’t someone who always dreamed of becoming an actor. I became a film major almost on a whim and I experienced the passion for acting second-hand through my actor friends.

In everything I’ve done, I’ve enjoyed working with good people, good producers and co-workers. That side has always been meaningful and important for me.

It’s fascinating to portray different characters in a comfortable environment surrounded by good people and over time I have come to learn what I need to do in order to depict these kinds of characters. I think time and experience have helped me to gain the skills necessary to do that.

What is the most important factor for you in choosing a project?

It’s the story, first and foremost. What the actors do have to flow into the story and the two have to come together to create a captivating story. If the story itself is not good enough, the actors have nothing to hook their acting onto. They end up with not much to say, so to speak. The characters only exist as part of the whole story. Other factors I consider are if I’m drawn to the character and whether the people I work with are good to be with. If I don’t enjoy working with them, there won’t be a synergy effect between all of us. Communication and getting along with each other is absolutely vital.

“I’m fascinated by stories of marginalized people that are not in history books.”


You once said that “it’s interesting to deal with unconventional aspects of history.” Can you tell me more?

When I was shooting on the set of “Great Ambition,” I happened to be by myself for some time. All of a sudden, a strange feeling swept over me and I felt as if I belong to that age, hundreds of years ago. Donning the costume of the Joseon Dynasty and surrounded props from that period, it felt like I was actually someone from that time. The feeling only lasted an instant but it felt so real.

Although the story and the characters are from another age, the actual drama itself is about what the characters are feeling right now as we shoot. We may be living in 2013, but there must have been so many stories that are not in history books, stories of people who weren’t in the mainstream. I’ve always been fascinated by hidden aspects of history.
“I cherish the memories of Singapore”

You starred in the film, “Dance of the Dragon.” What attracted you to the international project?

“Dance of the Dragon” was a co-production between several different countries. The script arrived at my office and it was about a Korean guy who wants to become a dancer. He goes to an audition in Singapore and there he falls in love. I felt it would be fun to work in a different country with a different culture. I wanted to meet people from different backgrounds. The three months I spent in Singapore were extraordinary. I cherish the memory of my experience there.

After “The Slave Hunter,” you said “Aging is a valuable experience for an actor.” It’s true that many actors in their thirties are active on the scene but Korean society is extremely sensitive to one’s age. In a market where youth is highly valued, do you have any concerns about getting older?

Not at all. I’m in my 17th year of my career and things have changed greatly since the time of my debut. Living one day to next I didn’t realize this until quite recently but it’s dawned on me that around the time of my debut, actors who were my age now weren’t given roles like mine in “IRIS 2”. Society’s attitudes have changed which means 40 now is like being 30 years old ten years ago. People think and act differently now compared to those times.
Korean people in their 30’s and 40’s now have been the generation that has absorbed all kinds of influences in culture. Korean opened its doors to many different kinds of cultural contents from abroad around the mid-1990’s and leaders in the fields of culture are people who were young around that time, people who are now in their late 30’s to 40’s. That’s why I don’t feel negatively about my age.

I used to think of my characters as good or bad but as I grow older, I have come to view them in a much more complex way. I find that for male characters, they’re at their most captivating from late 30’s to mid to late 40’s. They have had experience in life and they somehow seem more relaxed. Male characters in that age range are very appealing.


“I want to be a role-model for my kids, like all Korean dads.”


I heard your childhood dream was to become a teacher. Have you ever had regrets about your career choice?

I have no regrets about my choice. The reason why I wanted to be a teacher is because I like sharing what I know with people. I like learning new things and I like letting other people know about what I learnt.

Another reason for wanting to become a teacher was because my father was away in the Middle East for a lot of my childhood doing construction work. He worked in Saudi Arabia and Iraq in the 1970’s and 80’s, like many other Korean men of that time. He would come and live with us for a couple of weeks and go back to the Middle East for the rest of the year. That lasted for more than ten years. Teachers get off work at six so that was another reason why I wanted to become a teacher.

Before I met you, several people told me about how thoughtful and serious you are as a person. Come to think of it, I don’t think I’ve seen you often on TV variety shows.

I neither dislike nor love variety shows. All the variety show work I’ve done were for personal reasons. Kim Jong-kook, a regular on “Running Man,” is a very close friend of mine. That was the reason for going on that show. I felt if I know the other people on the show well, the show itself would be fun to watch. I don’t often feel comfortable surrounded by people I don’t know well. That’s why I only go on variety shows if I know the others on the program very well.

In an episode of “Win Win,” you revealed various aspects about bringing up your two sons. Tell me about Jang Hyuk the dad. What kind of father are you?

(A long pause) I’m like all the other dads in Korea. We’re all in different situations, living different lives but we all share one thing. We all want to be a role model for our children. That, I think, is the best attitude for a father to have.

I always have the same dream as an actor. I want my passion for acting to always stay strong.

You mean keeping the passion fresh and not fall into a rut?

Exactly. I want that passion to get even deeper than now. It’s good to work hard but things take on a deeper meaning if your passion is strong and fresh. It would be very dull to just keep working hard without a strong sense of passion.

What about the dream of Jang Hyuk the man?

It’s actually the same. I want that sense of passion to get deeper in my relationships with people. I also want to have a better sense of balance between my work and personal life. That’s what I want for this year.

あちらからはツイはこうでした。ユゴンはホントに死なないのかな？^^、
kkkk....Good Guys always WIN! Can't wait to get on the slopes for the action scenes here in AKITA! 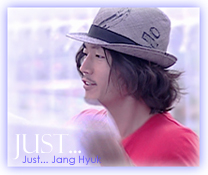 Thank you for tha・・・